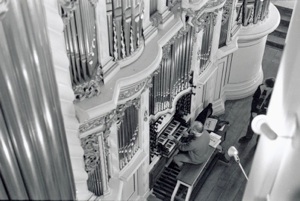 If you think organ music is heavy stuff and destined for funerals mainly, think again:
I discovered the music of Patrick Wilwerth in the MyPartitor sheet music library and found a lot of excellent performances by the master himself  on YouTube.

Patrick Wilwerth makes playing  and listening to organ music absolutely fun, joyful, energetic, modern, attractive.  He writes not only organ solo pieces, but makes the organ a compagnon to all the instruments you can think of : wind instruments, guitar, cello and the voice. Anything goes.

And a fair share of his music is already available in the MyPartitor library, ready for download, thanks to his editor Bayard-Nizet.

Organists of the world, discover and share the passion for organs and organ music of Patrick Wilwerth.

Fun ? Here is the link to the sheet music 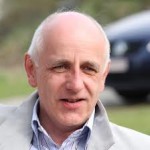 He since dedicates his time between recitals, composition and the safeguarding of the “organological” heritage,  acting as the author of several projects surrounding the restoration of historic organs in his region. As a teacher, he was a lecturer for Hubert Schoonbroodt at the Royal Conservatory of Music in Brussels and for Anne Froidebise at the Royal Music Conservatory of Liege.

Let’s take a break for a short intermezzo here:

Want to play this too ? Here is the link to the sheet music

The tradition of the composer-interpreter
As a composer of works for organ and choir, he is also dedicated to restoring the prestige  to some great names of ancient Liège music.

Furthermore he is a proficient organist in concerts  as well as in churches.  In 1993 he was appointed to succeed Hubert Schoonbroodt as artistic director and conductor of the University Choir of Liège and of the chamber choir “Praeludium” that he created in 1994.

Discover here one more composition, much more dramatic and forceful in nature than our previous example :
Prélude “A Magnum Mysterium”