Dominique Vanhaegenberg – brace yourself for brass 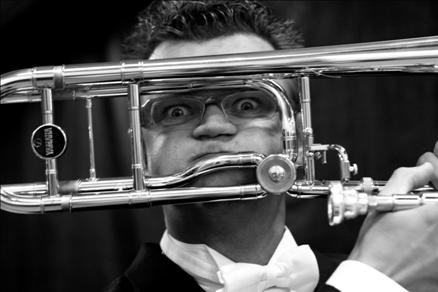 You might know Dominique Vanhaegenberg as trombone player in André Rieu’s Il Novecento, but hopefully also by his many compositions and arrangements for orchestra’s and for pop artists.

And if you are lucky enough to know Dominique in person, you will enjoy the contagious effect he has on the good mood of the musicians and the audience. His roguish eyes make it inevitable for you to grin. Still the seriousness with which he makes himself a man of repute in the world of music deserves our respect.

Studies and career
Dominique as a child accompanied his father (who played euphonium ) to the weekly rehearsal of the local concert band. As a result he enrolled at the age of 9 at the Peter Benoit Academy of Music and Drama in Harelbeke. He chose as instruments trombone and piano, trying his hand for a while also at the double bass. Three instruments at such a young age proved a little too much .

As a 13 -year-old he started his music studies in Ghent, Belgium, resulting in a range of first prizes (trombone, euphonium, chamber music), a higher diploma trombone ( class of Michel Tilkin) and a teaching degree for the brass instrument group. He still is a gifted pianist also.

From 1991 he started his professional career as the first trombone soloist with the New Flemish Symphony ( now Symphony Orchestra of Flanders ), then later became trombone soloist with the Flemish Radio Orchestra. In addition to his position in the salon orchestra of Andre Rieu (2009-2010) and Il Novecento, he worked as a freelancer with several domestic and foreign orchestras and ensembles (Beethoven Academy, Rotterdam Philharmonic Orchestra, I Fiamminghi, the Munt Opera Orchestra, the Philharmonic, Music Hall, Studio 100 and the Symphony Orchestra of Flanders.

Arranging
Dominique Vanhaegenberg is a very talented and hard-working composer. He produced a lot of compositions suitable for performances at music schools, concert bands and varied instrumentations.

Time to enjoy some of his arrangements now :

Tribute to Theo Mertens, featuring Belgian Brass with Dominique Vanhaegenberg on the trombone and Manu Mellaerts on the trumpet

The Royal Belgian Navy Band at the 2012 Virginia International Tattoo

You find a rich offer of sheet music for woodwinds, brass and band music from Dominique Vanhaegenberg for direct download in the MyPartitor library.